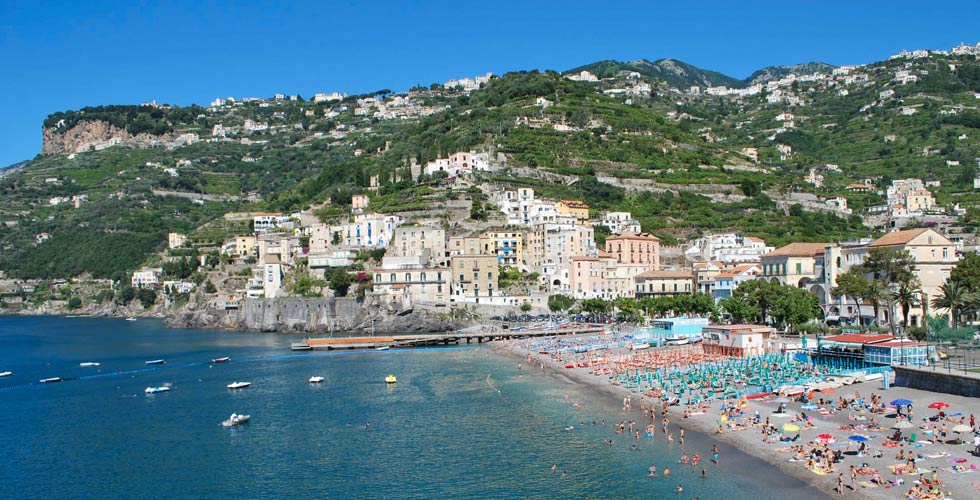 Minori is a pretty village on Italy's Amalfi Coast and a mere 4 Km from the town of Amalfi.
Once a place where noble Romans passed the summer months, today Minori is a much-loved holiday destination, famous for its mild climate and large, family-friendly beach.
Minori is famous for its food too, home to some of the best restaurants (Giardiniello, La Botte, La Ricetta, La Locanda del Pescatore, Il Libeccio) and pastry stores/bistrot Sal De Riso (the most famous pastry chef in Italy and one of the best in the world).

Since the 16th century the people of Minori dedicated their time to the production of pasta from wheat imported from Salerno. More recently, local agricultural producers have focused on the production of various kinds of liqueur (made with lemons, strawberries and fennel) and pastries (like the delizia del limone ) which are now known nationwide.
During the Gusta Minori (Tastes of Minori) food festival, that takes place in early September, visitors can sample local specialties and attend theatrical performances based on chosen themes.
The remains of a villa, dating back the 1st century A.D., were excavated in 1954. Together with another two ruined villas, this imposing construction testifies to the importance of the town in Roman times.

The villa, complete with fish pond, nymphaeum and vaulted rooms, complete with frescoes and mosaics is a Minori must-see.
The Antiquarium houses paintings found amid the ruins of the other Roman villas destroyed by the eruption of Vesuvius in A.D.79.
Open from 08:00 a.m. to 12:00 p.m. and from 04:00 p.m. to 07:00 p.m. - free entrance.