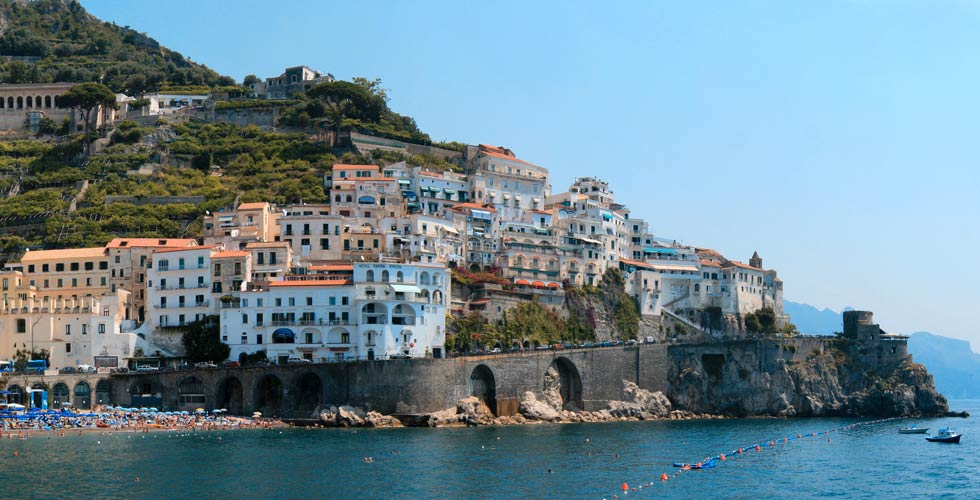 Amalfi nestles in the ravine of the Valle dei Mulini. Its churches, towers and arcade houses, grouped together with attractive irregularity, rise above a small harbour and are backed by precipices of wild magnificence.

At its peak in the 11th century, Amalfi was a supreme naval power, a bitter enemy of the northern maritime republics, Venice, Pisa and Genoa, and had a population of 70.000.
Its navigation tables, the Tavole Amalfitane, formed the world's first maritime code and governed all shipping in the Mediterranean for centuries.

Amalfi was founded in the 9th century and soon came under the rule of a doge. As a consequence of its connections with the Orient, the city claims to have introduced to Italy such modern wonders as paper, coffee and carpets.
This small town still bears many reminders of its seafaring and trading heyday and is now one of Italy's most famous seaside spots.

An imposing sight at the top of a sweeping flight of stairs, dating from the early 10th century. The bronze doors of the church came from Constantinople and date from 1066.

In the town hall building. The museum houses the Tavole Amalfitane and other historical documents.
Open Monday to Friday from 8:00 a.m. to 2:00 p.m.

Located about 4 km (2,5 miles) from the hotel along the coast towards Positano. This natural grotto at sea level, is called ''Smeraldo" because of the emerald colour of the water.
The emerald light also plays on the mineral formations in the cave. Stalactites have dripped down to join stalagmites in columns that reach a height of 10m.
The cave is also famous because of the submerged Crib made from ceramics produced in Vietri.
You can reach the grotto by bus, by car or by private boat.